OLYMPIA – The Washington State Department of Agriculture (WSDA), Oregon Department of Agriculture (ODA), and USDA’s Animal Plant Health Inspection Service (USDA APHIS) found the first Asian giant hornet nest of 2021. The nest was in a rural area east of Blaine, Wash., about one-quarter mile from where a resident reported a sighting of a live Asian giant hornet on Aug. 11, the first of 2021.

WSDA narrowed the search area by Aug. 17 but was unable to access the location until today. A WSDA tracking team and a team of USDA APHIS and ODA staff searched the area beginning this morning at 7:30 a.m. with the USDA APHIS and ODA team spotting the nest about 9:15 a.m.

“I was glad to be able to share what I learned last year with our ODA collaborators,” said Stacy Herron, a USDA APHIS plant health safeguarding specialist who assisted WSDA on the hornet project last year. “Finding the nest with ODA one day after simulating tagging and tracking in training was a very rewarding experience and demonstrates just how valuable the WSDA training was.” 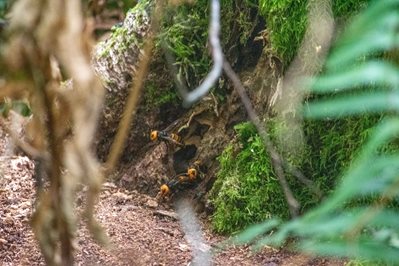 “It’s an honor to be a part of this innovative pest prevention work in Washington,” said Jake Bodart, ODA Insect Pest Prevention Management program manager, said. “While Asian giant hornets have not yet been detected in Oregon, we are pleased to participate and learn first-hand from our partners on what it takes to respond to introductions of this emerging pest.”

“Teamwork has been the key to success with this effort,” Sven Spichiger, WSDA managing entomologist said. “Whether it is the public reporting sightings and building traps or state and federal agencies working together, this is really a model for success in invasive species management.”

WSDA netted, tagged with a tracker and released three hornets between Aug. 11 – Aug. 17. One hornet slipped out of the tracking device, another hornet was never located, and one eventually led the team to the nest. 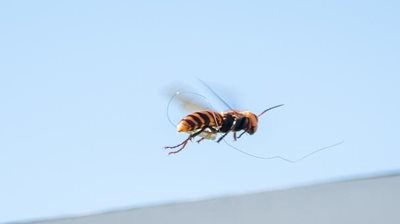 WSDA entomologists will now develop their plans to eradicate the nest, most likely next week.

While one nest has been located, there may still be more. The public is still asked to report suspected Asian giant hornet sightings at agr.wa.gov/hornets in Washington State. While no Asian giant hornets have been found in Oregon, suspected sightings can be reported at oda.fyi/HornetReport.